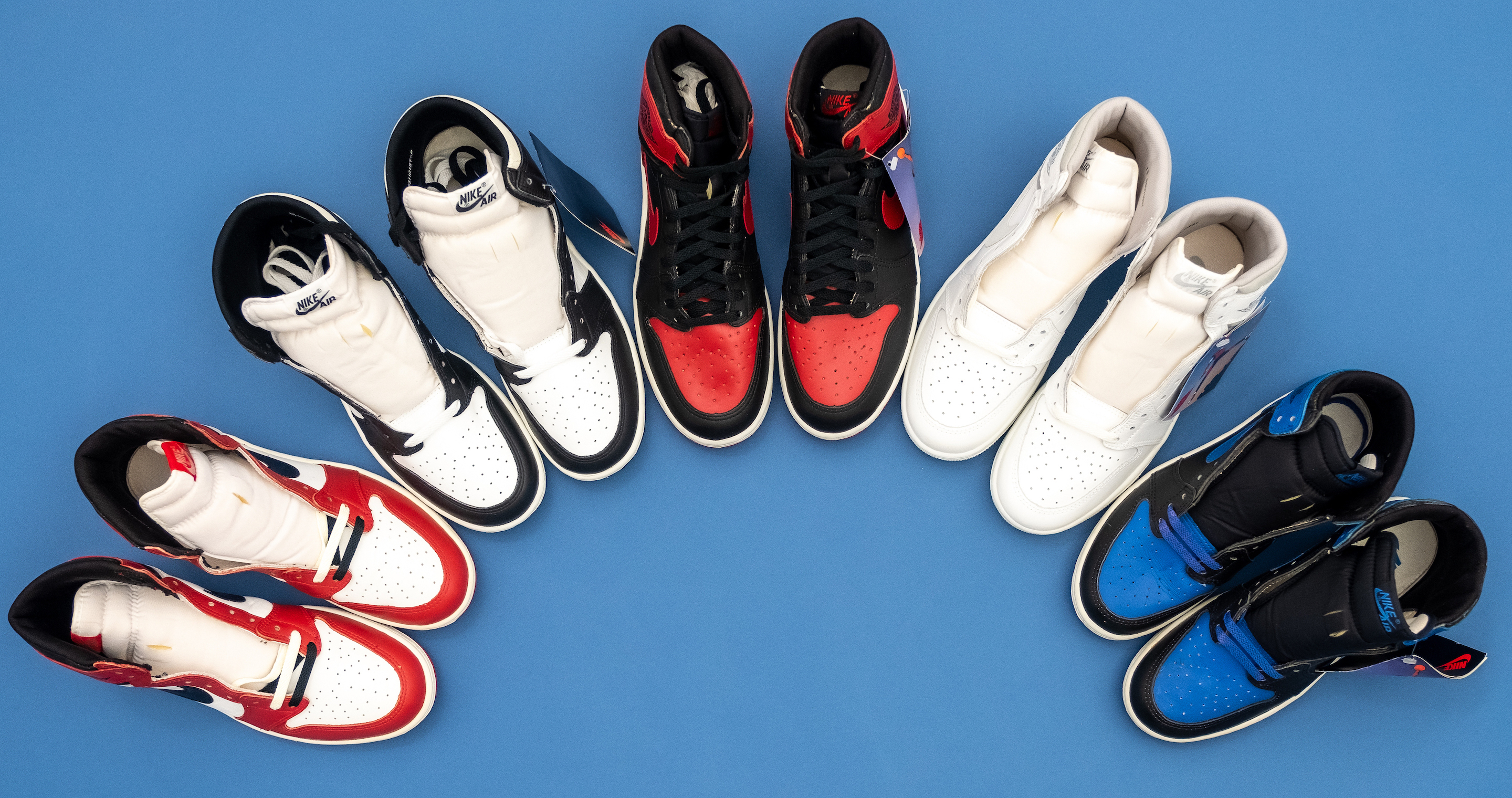 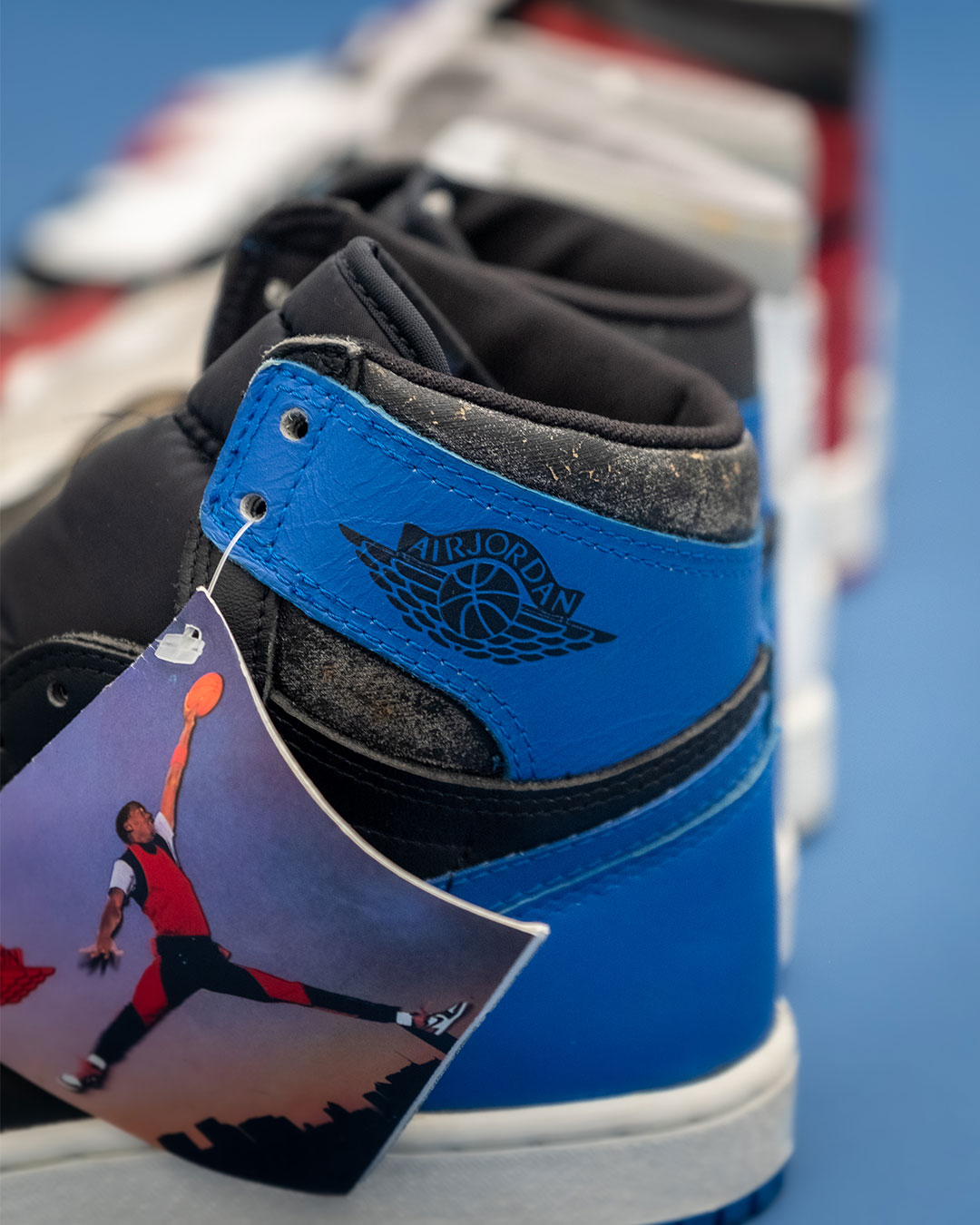 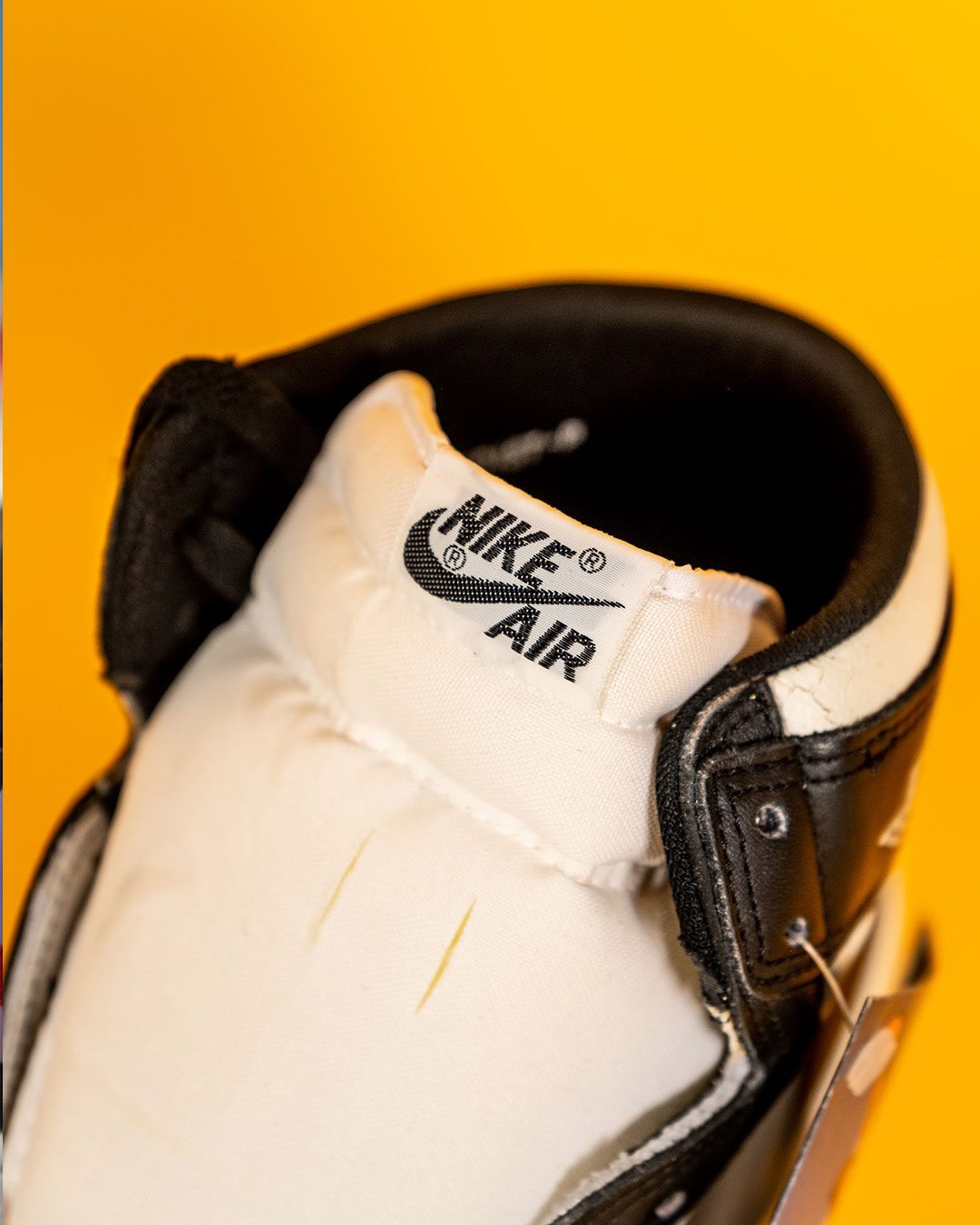 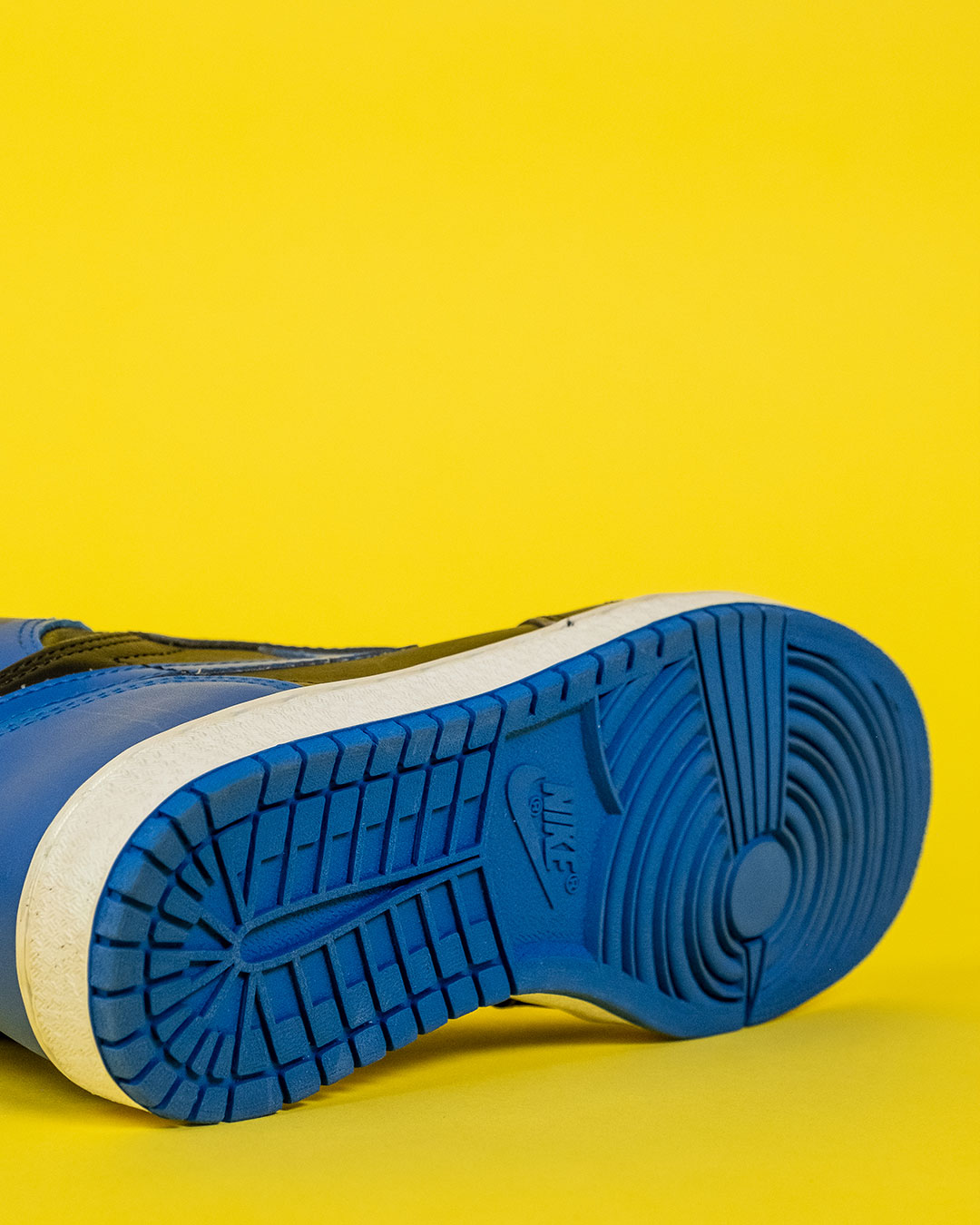 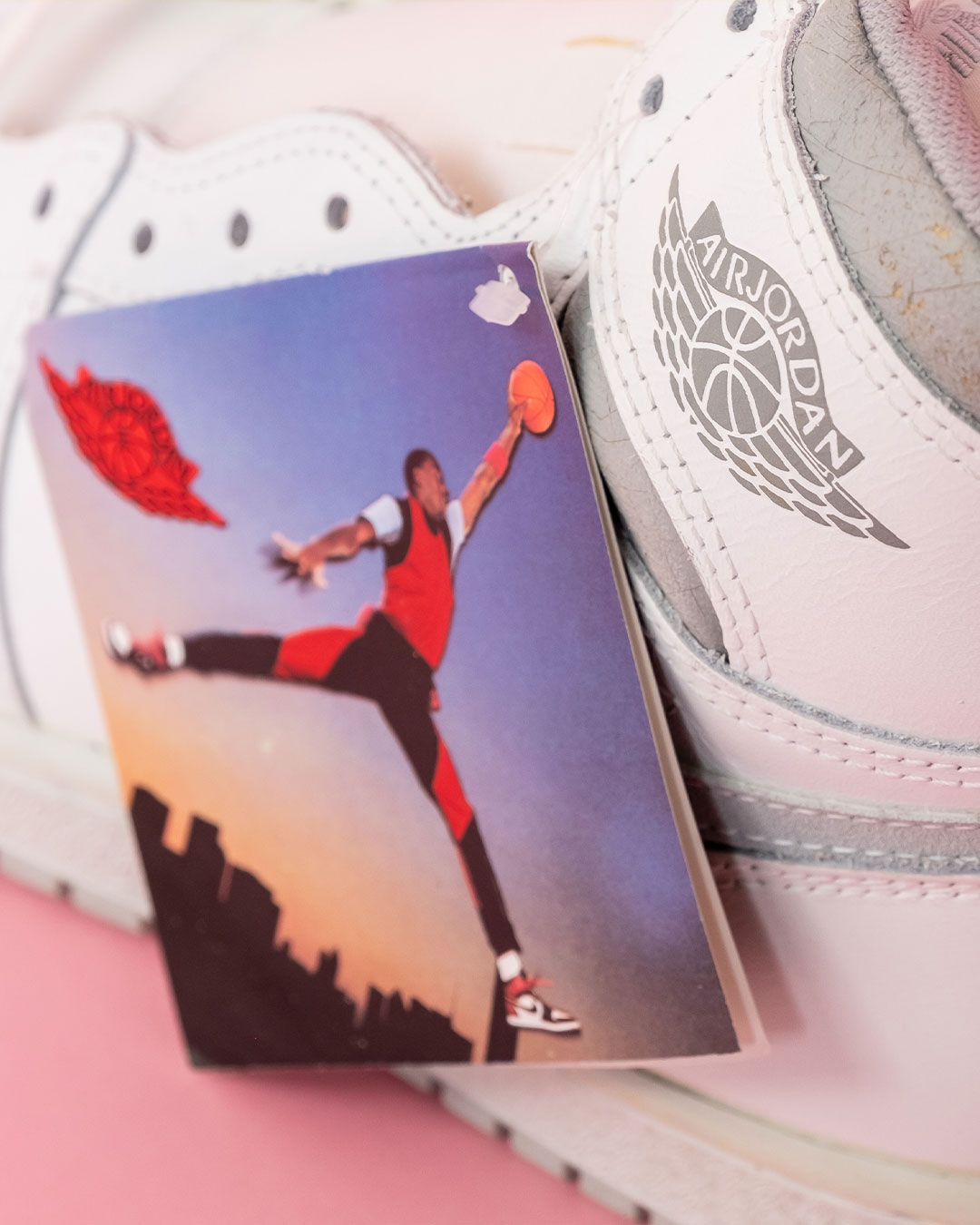 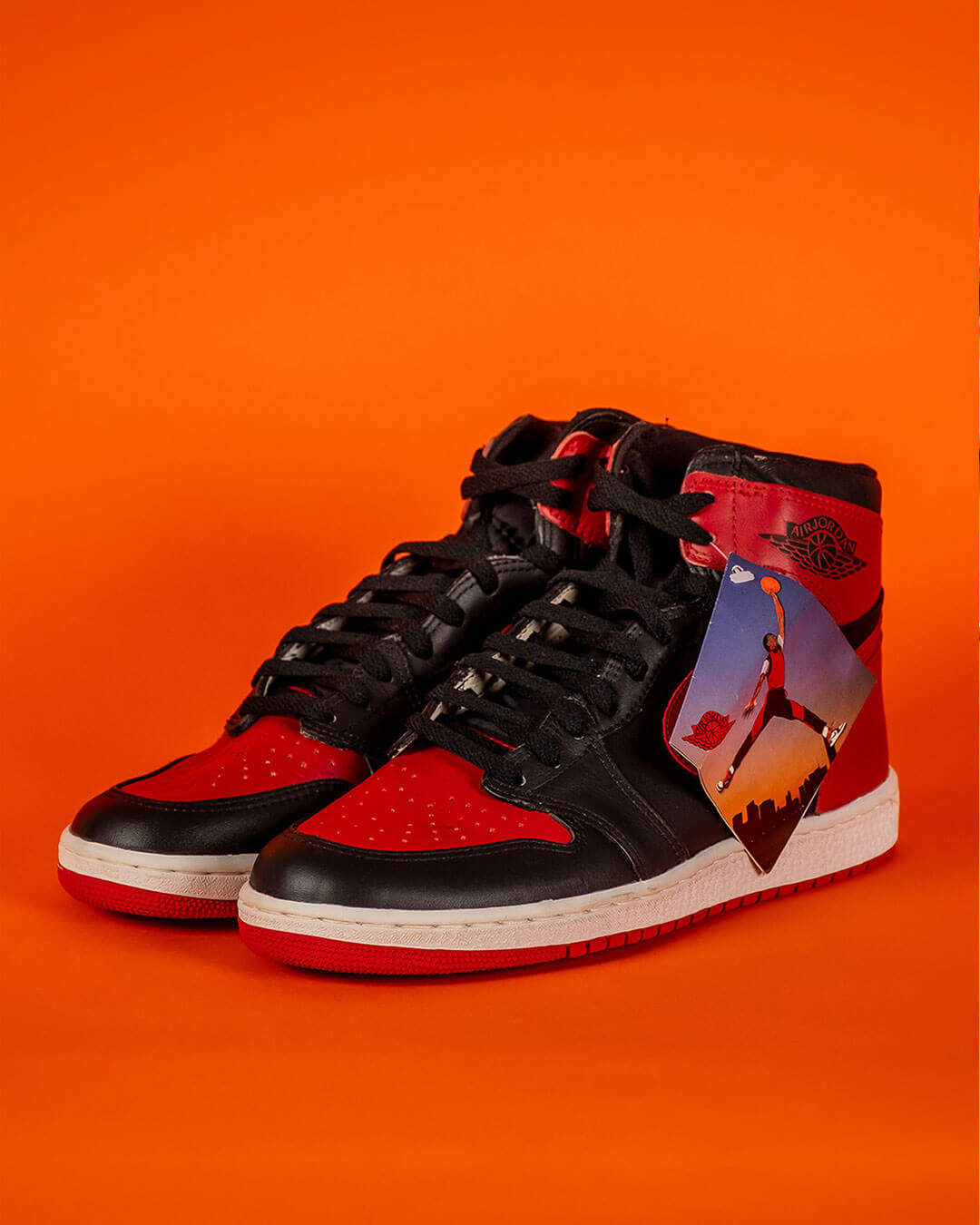 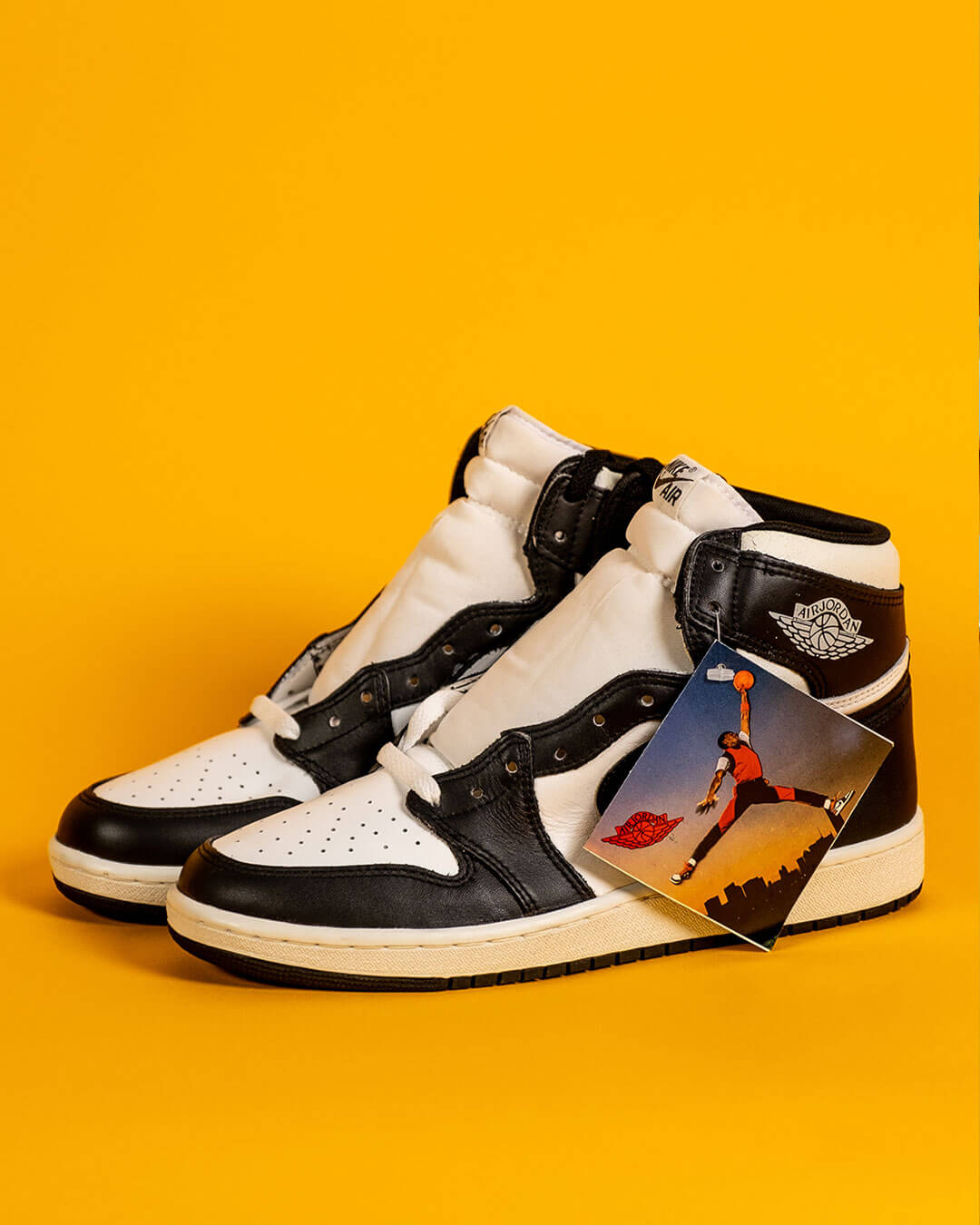 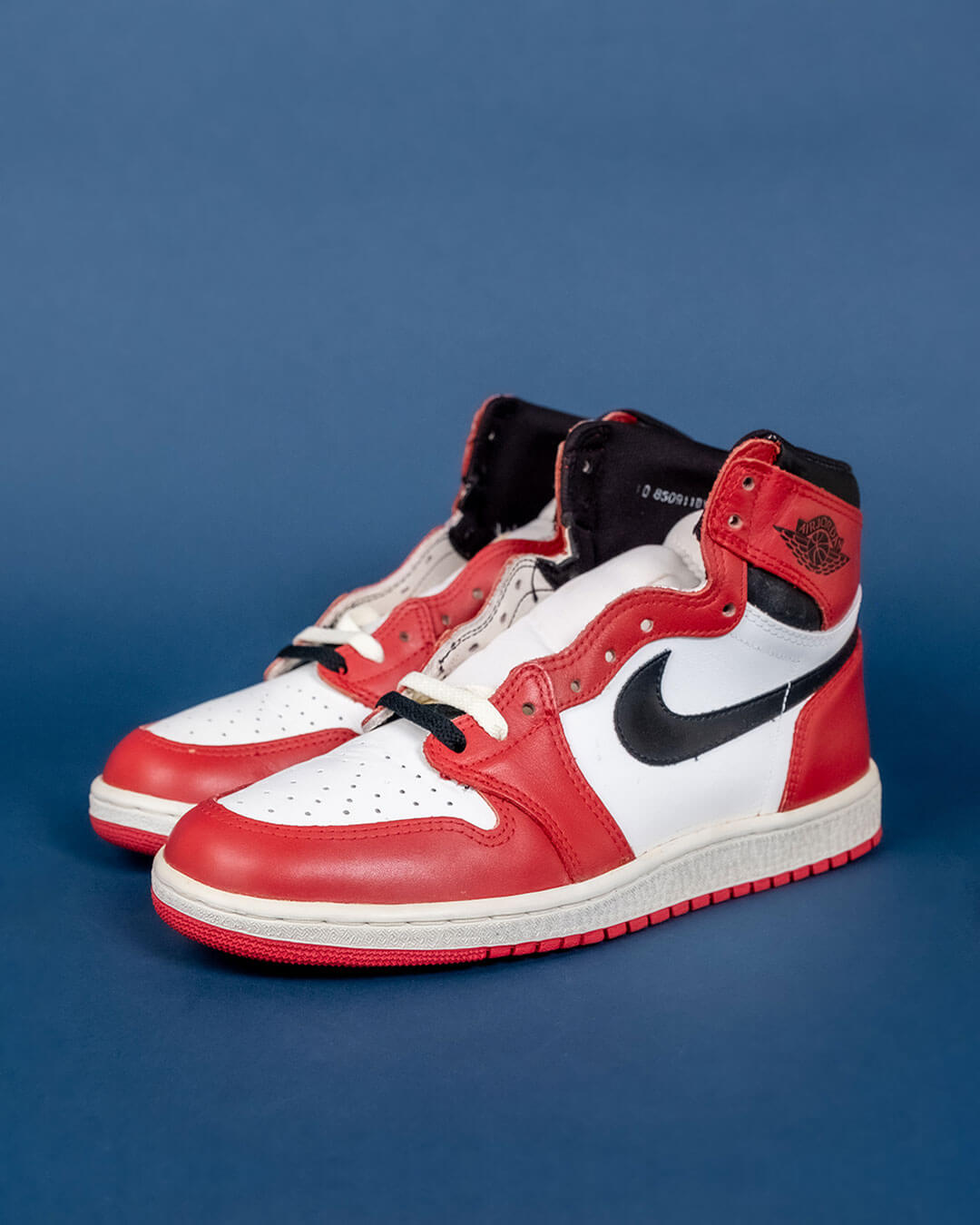 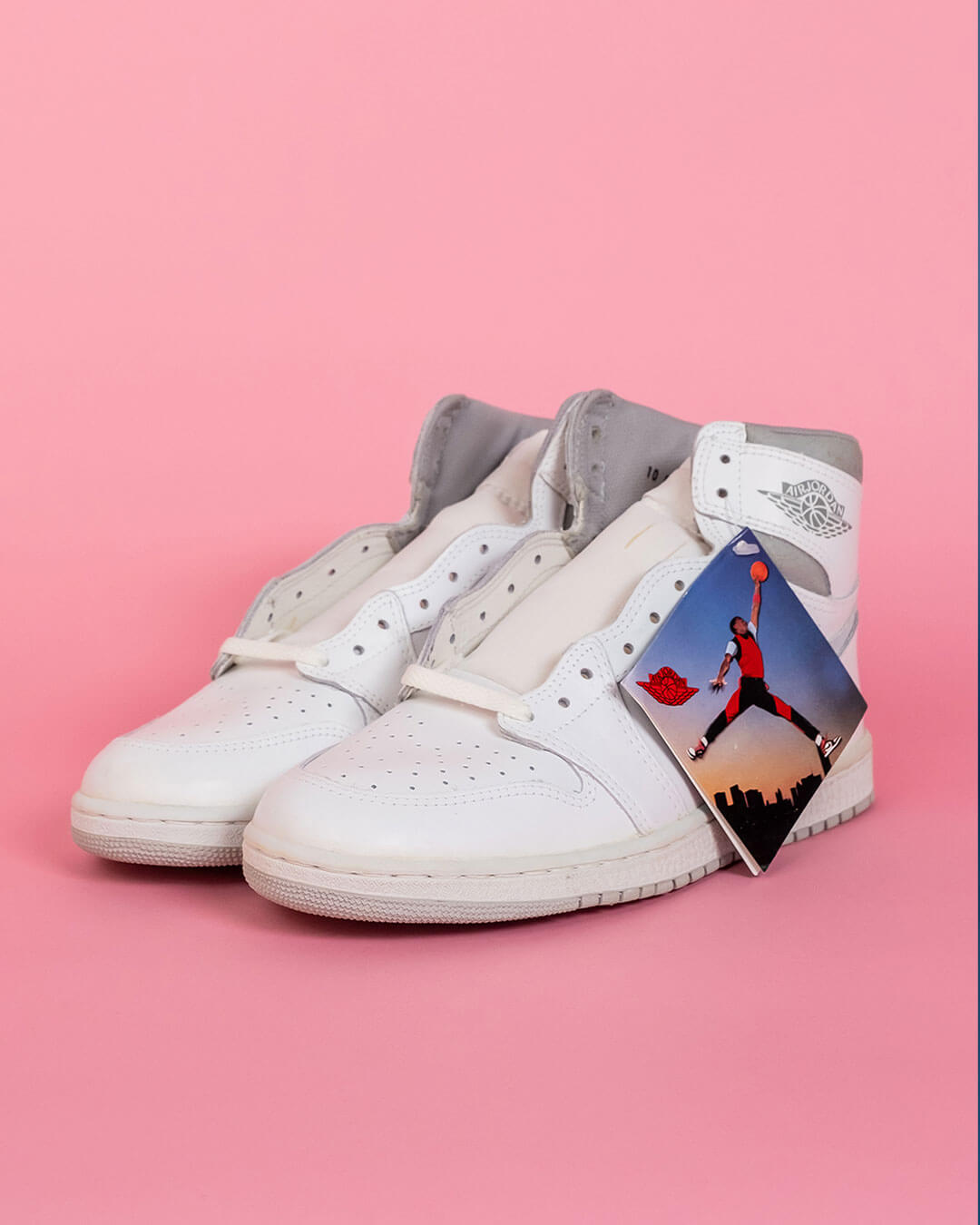 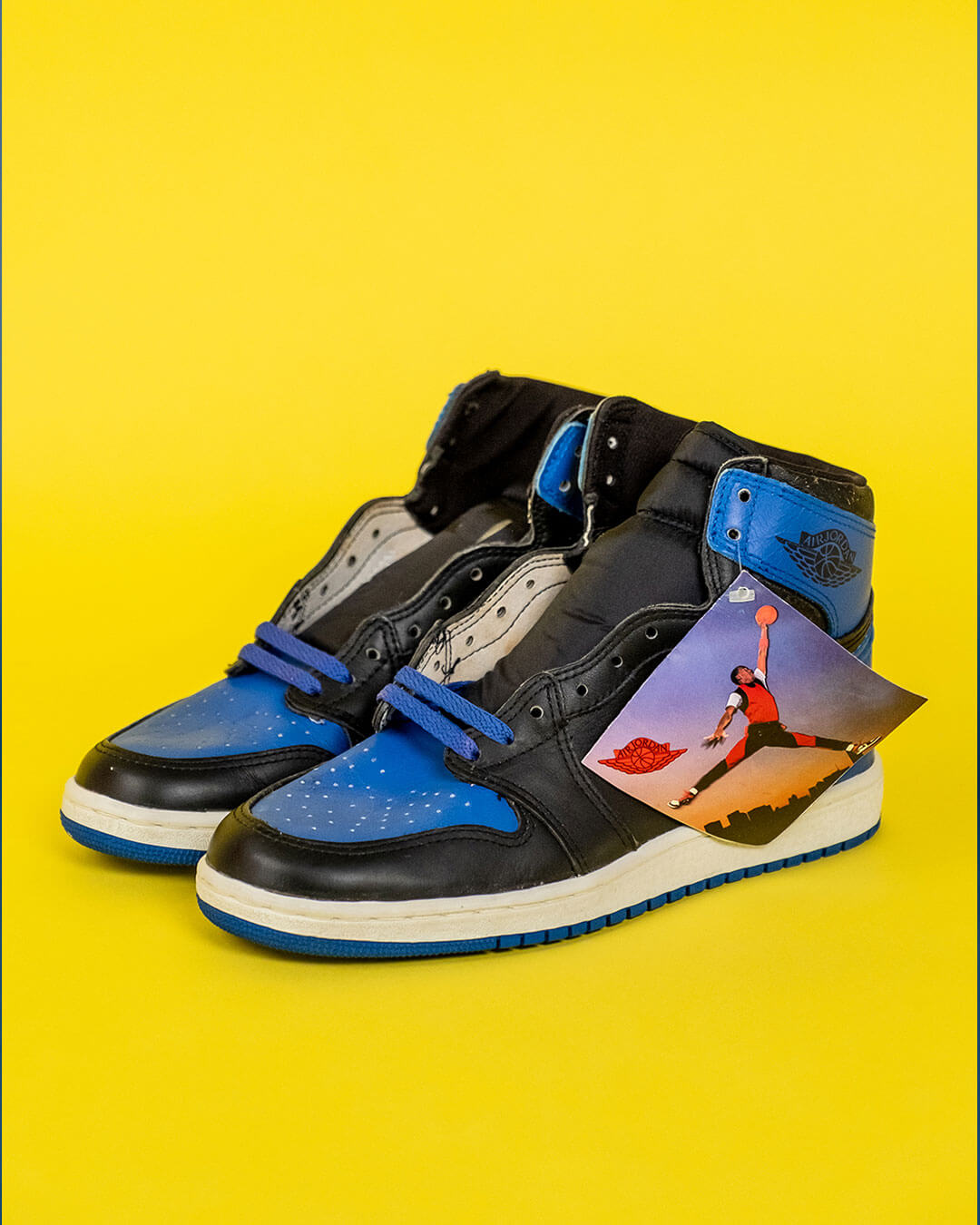 The story of the Air Jordan 1 begins in 1984 when a young basketball prospect named Michael Jordan left the University of North Carolina, Chapel Hill, to enter the NBA draft. After being picked 3rd overall by the Chicago Bulls, Jordan’s career was primed for an exciting start.

Despite being Jordan’s rookie season, sneaker companies were eager to sign the soon-to-be NBA legend. At the time, Nike was far from Jordan’s radar--MJ’s on-court shoe of choice was the Chuck Taylor, although he had expressed interest in partnering with the leader in sportswear, Adidas. As a smaller company, Nike knew they had to present an unparalleled offer. Using the budget that had previously been reserved for three-player endorsements, Nike offered MJ $500,000/year over 5 years, an astronomical leap in endorsement size from even the biggest NBA stars at the time (Kareem Abdul-Jabbar, Magic Johnson, etc.). Perhaps more importantly, Nike promised to build an entire brand, with Jordan himself at the center.

Rather than endorse a shoe, Jordan would have his very own. Known for his 46” vertical leap, Michael suggested they call him “Air Jordan.” When Jordan signed to the swoosh in August of 1984, designer Peter Moore was tasked with creating the first shoe by late September of that year. Moore credits the Wing logo’s design to a flight he took following a meeting with MJ. While sitting on the plane, he noticed a flight attendant hand a young passenger a set of toy wings. Immediately he began sketching the Air Jordan wings logo on a cocktail napkin, which was later presented to Jordan.

When it came to the shoe’s design itself, Jordan’s input was incredibly important. He wanted something different from everything Nike had ever made. Jordan’s predominant complaint was that Nike’s air bubble technology made them too high; he needed to feel closer to the court.

Using design elements from existing shoes like the Nike Air Ship, paired with Jordan’s personality and unique playing style, Moore created the Air Jordan 1. It was bright, it was bold, it was different. It had color, capable of adding color to his gameplay. In a time when shoe designs were informed by performance and functionality, not style, the Air Jordan 1 merged those worlds.

What happened next lends itself in equal parts to legend as it does facts. As the story goes, NBA commissioner David Stern banned Jordan from wearing the shoes in October of 1984. Despite being retrofitted for Chicago Bulls colors, the league argued that the shoes did not match the rest of the Bulls players, reflecting poorly on the team notion of basketball. According to a letter issued by the NBA, Jordan was to be fined $5,000 for each game he wore them, and having already ordered 50,000 pairs, Nike was prepared to pay the fine for the remaining 82 games of the season.

After reading the context of the letter, Nike’s marketing director, Rob Strasser, saw an opportunity to capitalize on the moment. Using the optics and confusion of the feud in their favor, Nike released its iconic “banned” campaign.‍

Those simple words, “Fortunately, the NBA can’t stop you from wearing them” echoed through American televisions, giving new meaning to Air Jordan. The AJ1 was no longer just a shoe; it transcended into a statement against the establishment; against following the rules because the rules were outdated. They came to embody the spirit of youth and rebellion while offering a means of expressing individuality through style. For the first time, the sneakers you wore meant something about your identity and who you are, without saying them at all. Needless to say, the 50,000 pairs Nike had bought quickly sold out.

The legacy of the NBA ban is still contested to this day. Some say the shoes that were initially banned were the Nike Air Ships, a shoe Jordan wore before the Air Jordan samples had been produced. The late David Stern insisted that the shoes were against the rules, but were never “banned” although he gave Nike props for their creative marketing campaign.

Regardless of how the legend actually played out, the anti-establishment sentiment stuck almost instantly. Rebellious subcultures from hip-hop and breakdancing to skateboarders and graffiti artists embraced the Jordans. Perhaps Spike Lee’s character Mars Blackmon said it best, “It’s gotta be the shoes.”

That year, with the world watching, Nike went on to release 13 colorways of the original Air Jordan 1. Over the next 15 years, Jordan went on to become what many consider to be the greatest player of all time, building a multi-billion dollar brand in his wake. Featuring five of the original 13 colorways, Otis is excited to present our 1985 Jordan 1 drop.

Strong Demand at Auction
In a 2015 auction held by Paddle 8, bids for a used pair of 1985 Jordan 1’s exceeded $17,000. Otis acquired a deadstock pair of Chicago’s for $5,000.
Secondary Market
According to Grailed, market prices range from $3,000-$33,000 depending on provenance, condition, accessories, and colorway. All pairs in Otis' collection are deadstock and were purchased for an average price of $6,000/pair.
Cultural Influence of the Nike Air Jordan 1
The 1985 Nike Air Jordan 1 launched the most popular series of sneakers in history. It is considered by some to be the best Jordan model ever made.
Scarcity and Condition
The 1985 Nike Air Jordan 1 is unique in its silhouette and material. Since its release, many pairs have been worn or improperly stored, driving up scarcity of deadstock pairs.
Authenticity
Our 1985 Jordan 1's were authenticated by Stadium Goods and notable 1985 Jordan 1 collector, Dylan Ratner.