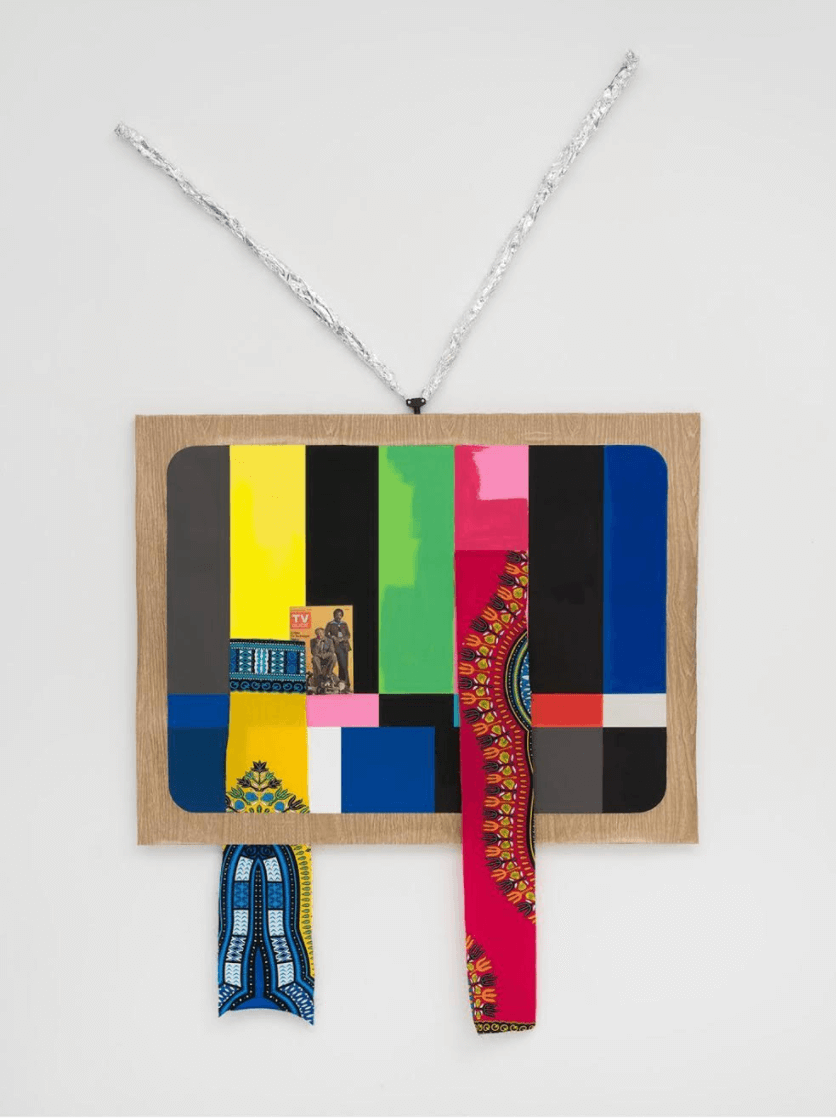 Derrick Adams (1970) is an artist who works in a variety of mediums, including painting, sculpture, collage, performance, video and sound installations. His work seeks to explore the influence of contemporary culture on our lives and the intersection of the African American experience with art history, American iconography and consumerism. Adams says, “most of my work resides in this idea of how outside influences impact the construction of self-image”.

Adams created Colorbar Constellation, a series of multimedia collage works depicting television screens, in 2016. The works are intended to expose the inadequate representation of African American figures in the visual world. They are made from panels of dashiki cloth fabric and paper from TV Guide covers featuring Oprah Winfrey, Will Smith and The Cosby Show. Works from Adams’ 2016 Colorbar Constellation series have received institutional attention via an exhibition titled Transmission at the Museum of Contemporary Art in Denver in 2018.

In discussing the theme of television, Adams told interview magazine, “I was always fascinated with the power that artists had at that time to create these illusionistic structures that mimicked reality around them in some way, and were able to get emotional responses from people and enlighten them about things they thought were important. In our generation, television has that same godly presence; it’s always there, always visible, seeing you as much as you’re seeing it.”

Fast-rising market star
According to Artsy, Derrick Adams was among the most inquired-upon artists at art fairs in 2019, ranking 9th on the list ahead of artists like Banksy, Picasso and George Condo.
Demand at Auction
At auction, his works have a 100% sell-through rate over the last 12 months, and a 281% realized price over estimate.
Upcoming exhibitions
Two confirmed upcoming 2021 shows at Salon94 and Rhona Hoffman, reinforcing commitment from top galleries and continued momentum.
Institutional Attention
Works from 2016 Colorbar Constellation series, which includes our asset, have received institutional attention via an exhibition titled Transmission at the Museum of Contemporary Art in Denver in 2018. Adams’ work is in the permanent collections of a number of museums, including The Metropolitan Museum of Art and the Whitney Museum of American Art.
Career Highlights
Adams is represented by Rhona Hoffman Gallery, Luxembourg & Dayan and Salon 94. Career highlights include having a solo show at a major institution (the Studio Museum in Harlem), being reviewed by major art publications (Artforum, Frieze, Art in America) and being included in major biennales (Performa, Prospect New Orleans).
Macro Tailwinds
African American artists are gaining momentum - Adams is cited in a Bloomberg article about Wall Street and Museums ramping up their acquisitions of works by African American artists.
Investment Risks
This investment is speculative and involves substantial risks to consider before investing, outlined in the Offering Circular and including, but not limited to, illiquidity, lack of diversification, and complete loss of capital. An increase in supply or decrease in cultural significance could adversely affect pricing. Also, the adverse economic effects of the COVID-19 pandemic are unknown and could materially impact this investment.