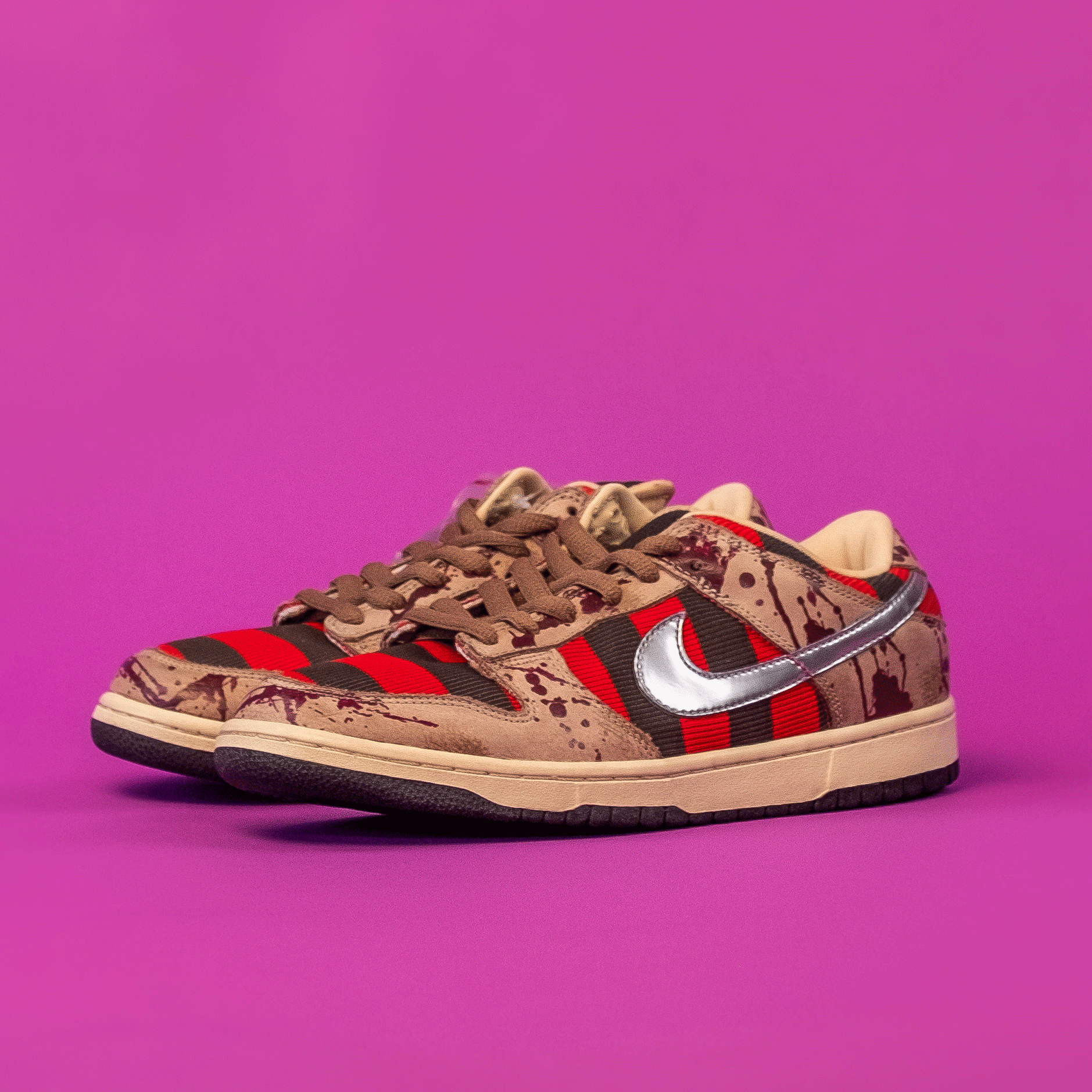 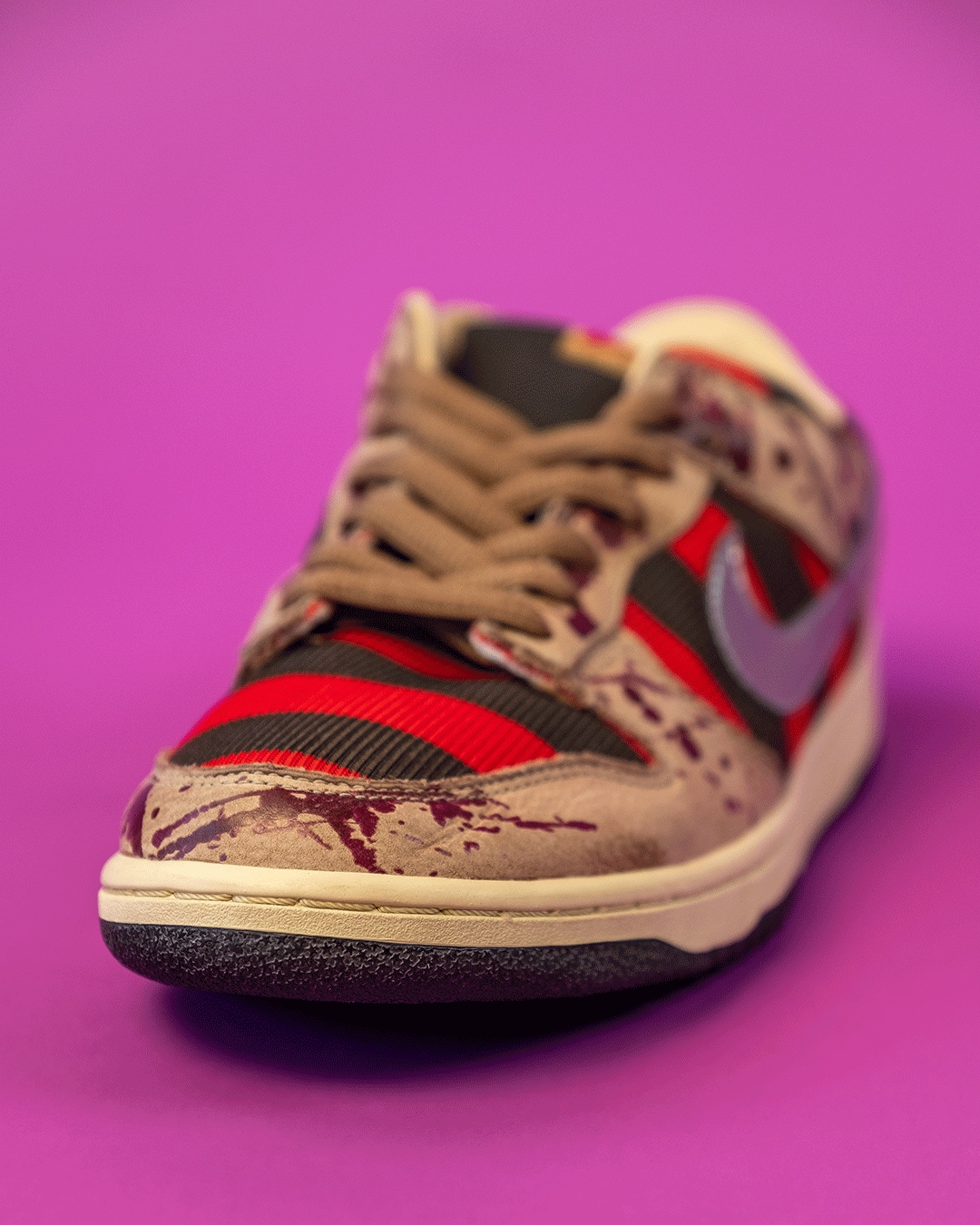 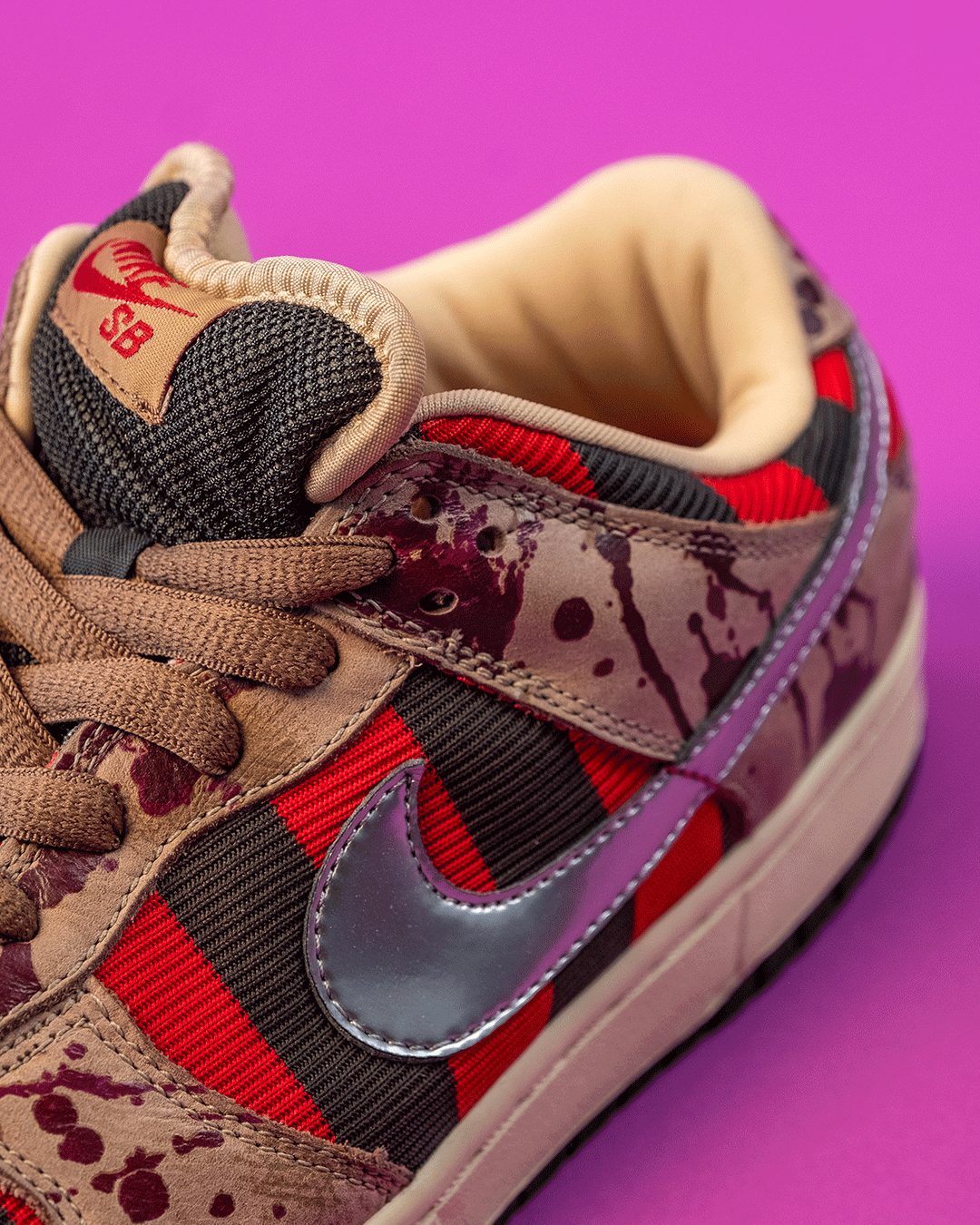 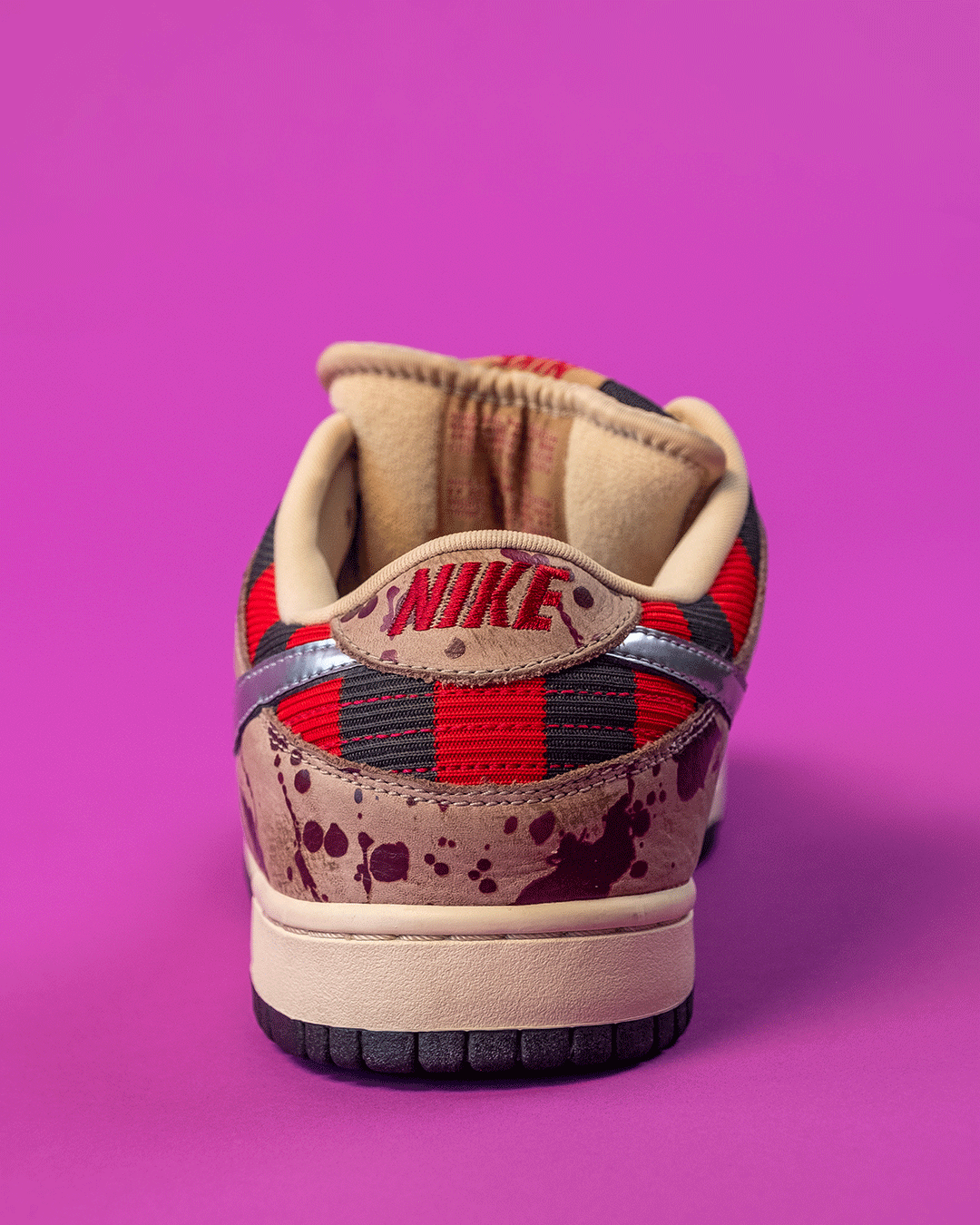 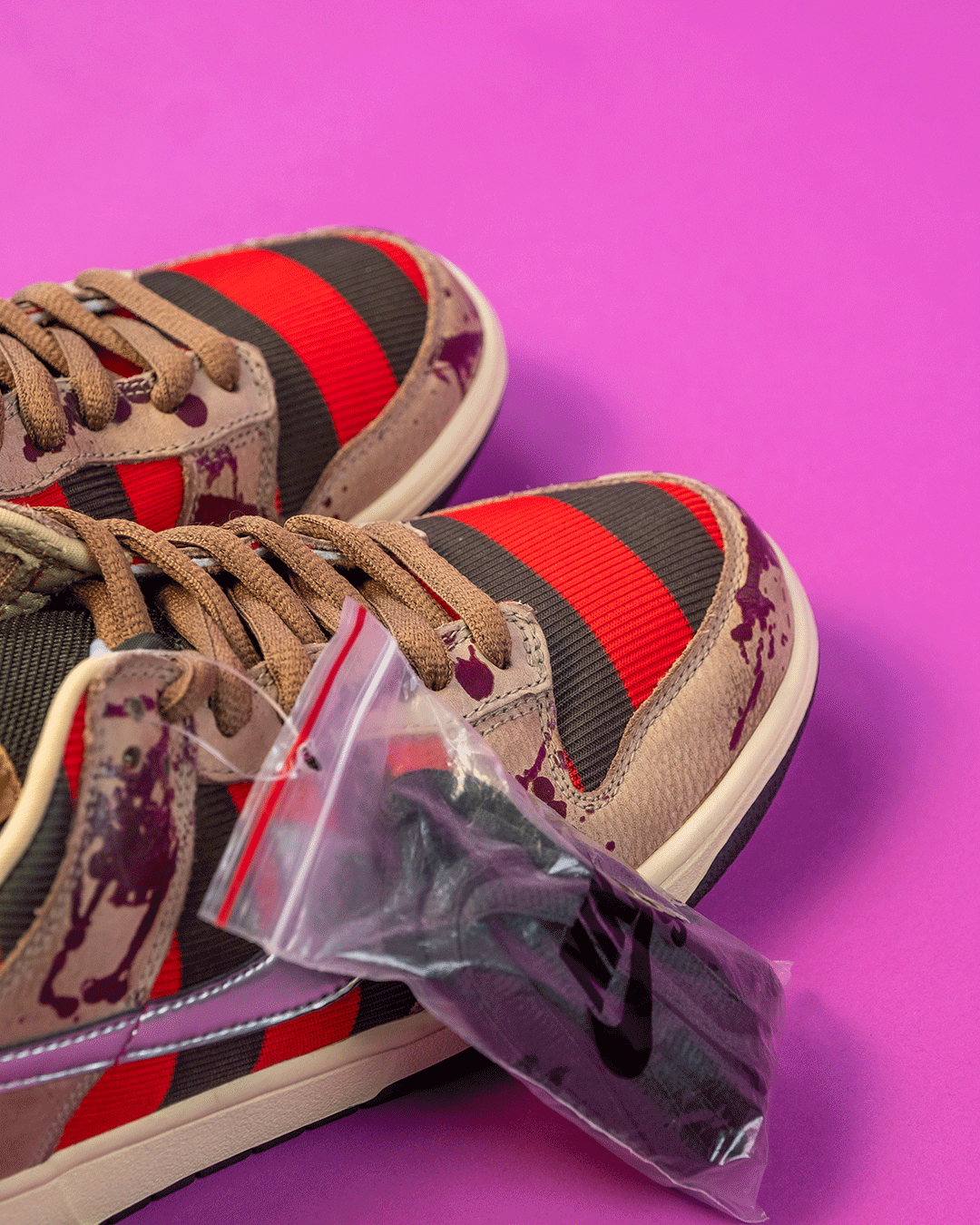 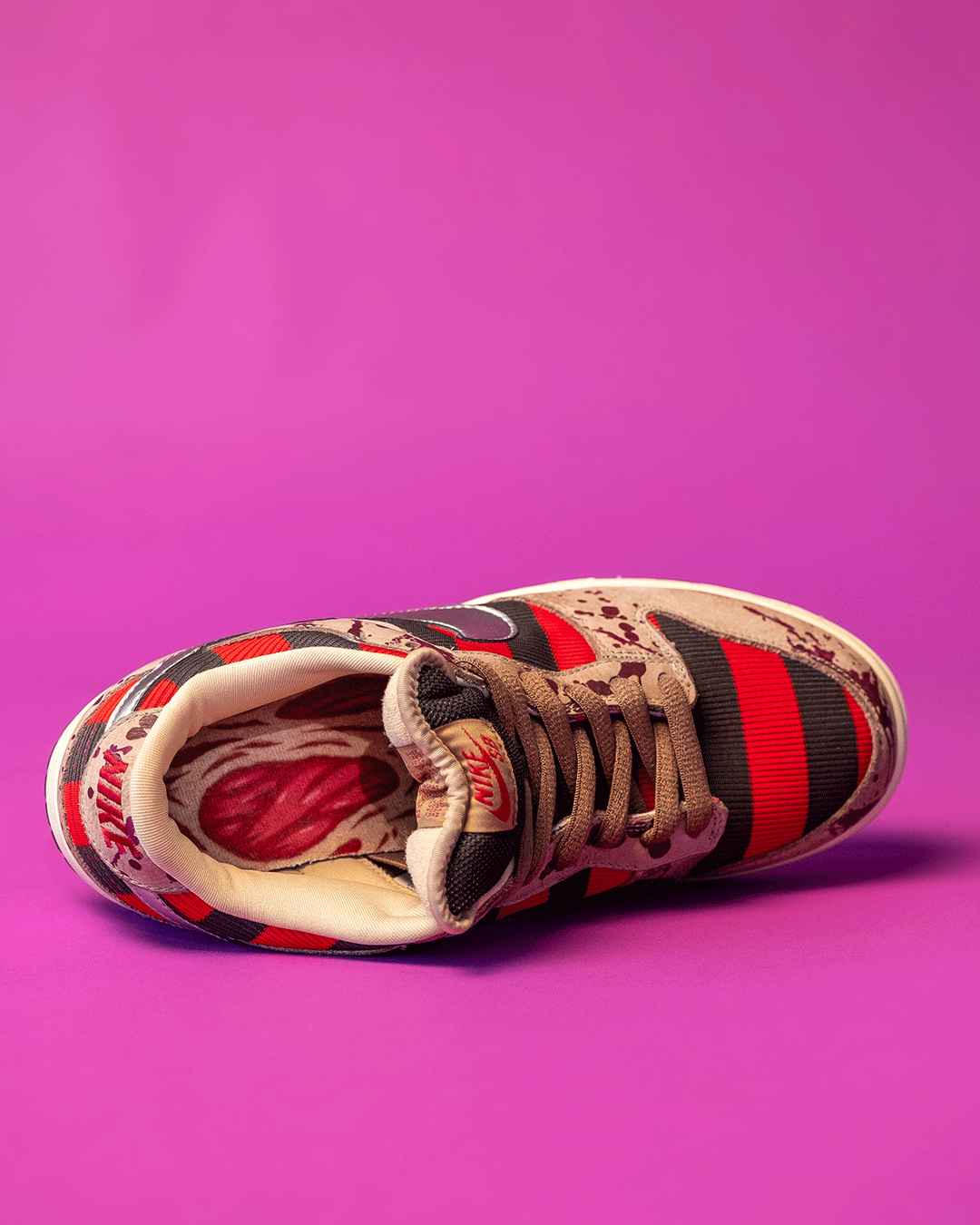 There is no scarier and highly sought after sneaker than these Freddy Krueger Dunk SB's. Created in 2007, the design is modeled after it’s namesake -- the antagonist of cult favorite movie, “Nightmare on Elm Street”. The shoe features a green and red striped body, modeled off of Freddy’s signature sweater, and blood splattered beige accents.

Although they were included in Nike SB’s “Halloween” pack, these shoes never hit the market. The Nike SB Dunk Low “Freddy Krueger” was pulled from production following a cease-and-desist letter from New Line Cinema, the company responsible for “Nightmare on Elm Street”. New Line Cinema demanded for the already manufactured shoes to be incinerated and wiped from shelves. Thanks to a couple enterprising employees, this legendary shoe still circulates today. A couple pairs were smuggled from the factory by employees prior to their destruction. Additionally, one small skate shop in Mexico mistakenly sold a few pairs early.

As a result of the legal battle and the subsequent slip ups, there are reportedly only 30 pairs of the Krueger Dunks left in circulation. The shoe has been spotted on notorious sneakerhead and Nike SB collector Travis Scott. This shoe is one of Nike’s scarecest, and in deadstock condition, like our asset, it is even rarer.

The Nike SB Dunk Low was designed by Peter C. Moore. As the original designer of Nike’s early roster of shoes, including the original Nike Dunks and Nike Air Jordan 1’s in 1985, Moore created shoes that transcended their original sport and intended usage. Nike SB, the skate-focused appendage of the brand, was helmed by Sandy Bodecker. The already popular Nike Dunk was reimagined in 2002 to appeal to skaters. Through collaborations with skateboard powerhouse Supreme and partnerships with major skaters like Reese Forbes, Gino Ianucci, Richard Mulder, and Danny Supa, Nike SB finally found footing within the world of skating and made a lasting impression on sneaker culture as a whole.

Grail Status
The Nike SB Dunk Low “Freddy Krueger” is considered by some to be the one of the most influential Nike SB Dunks ever made.
Cultural Relevance
The Freddy SB’s botched release made it one of the most controversial shoes in Nike’s history.
Deadstock
The shoes are in brand new, deadstock condition.