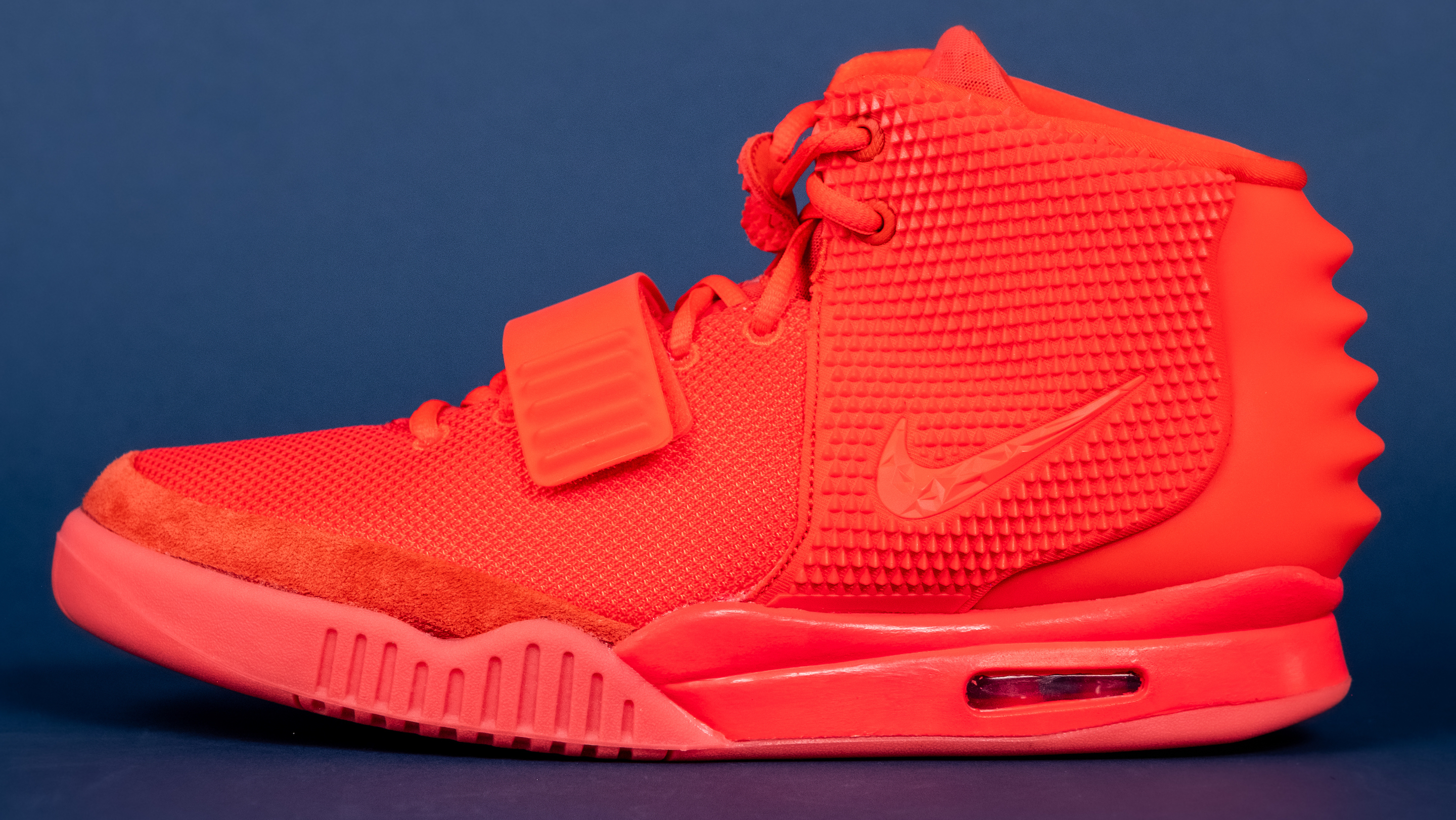 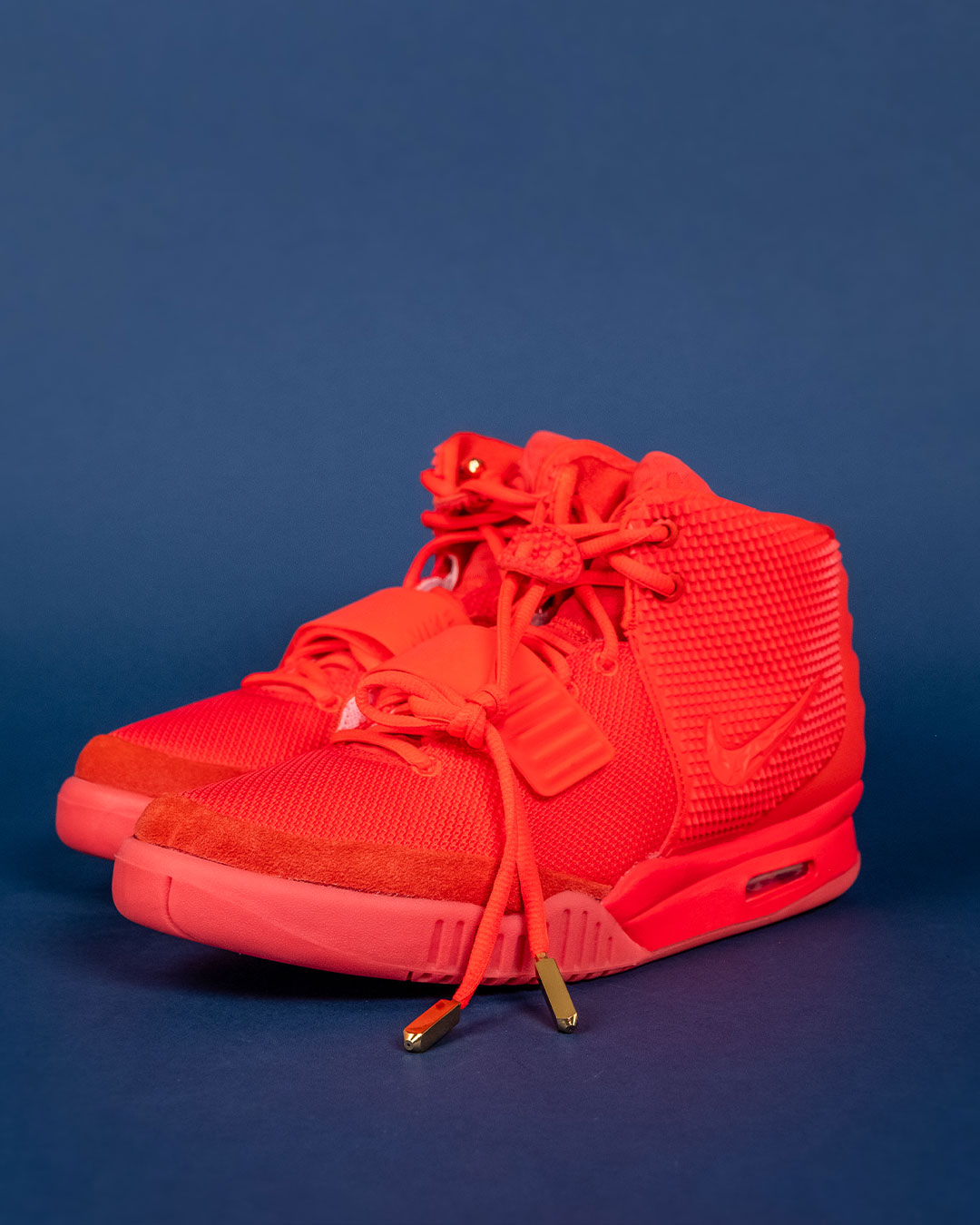 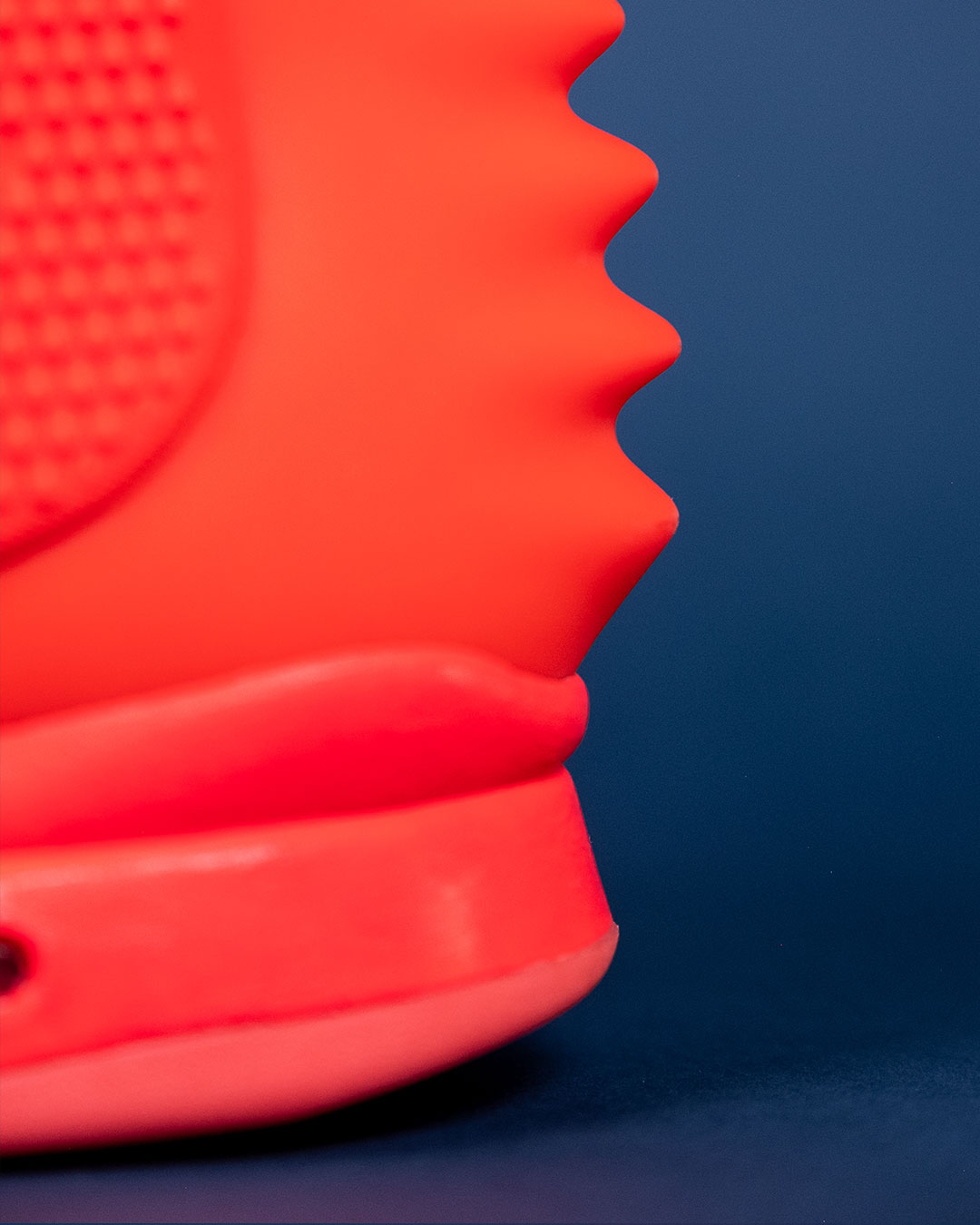 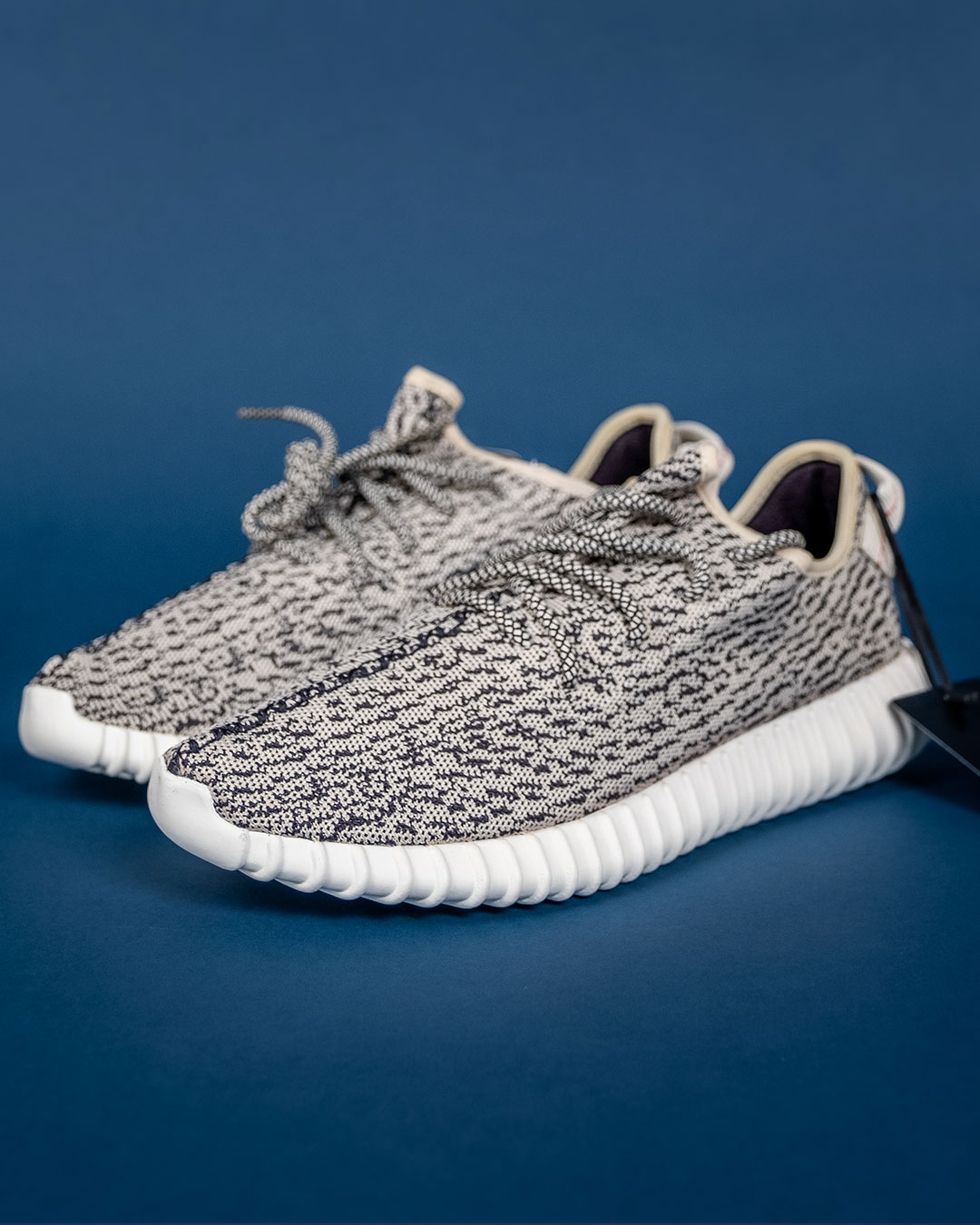 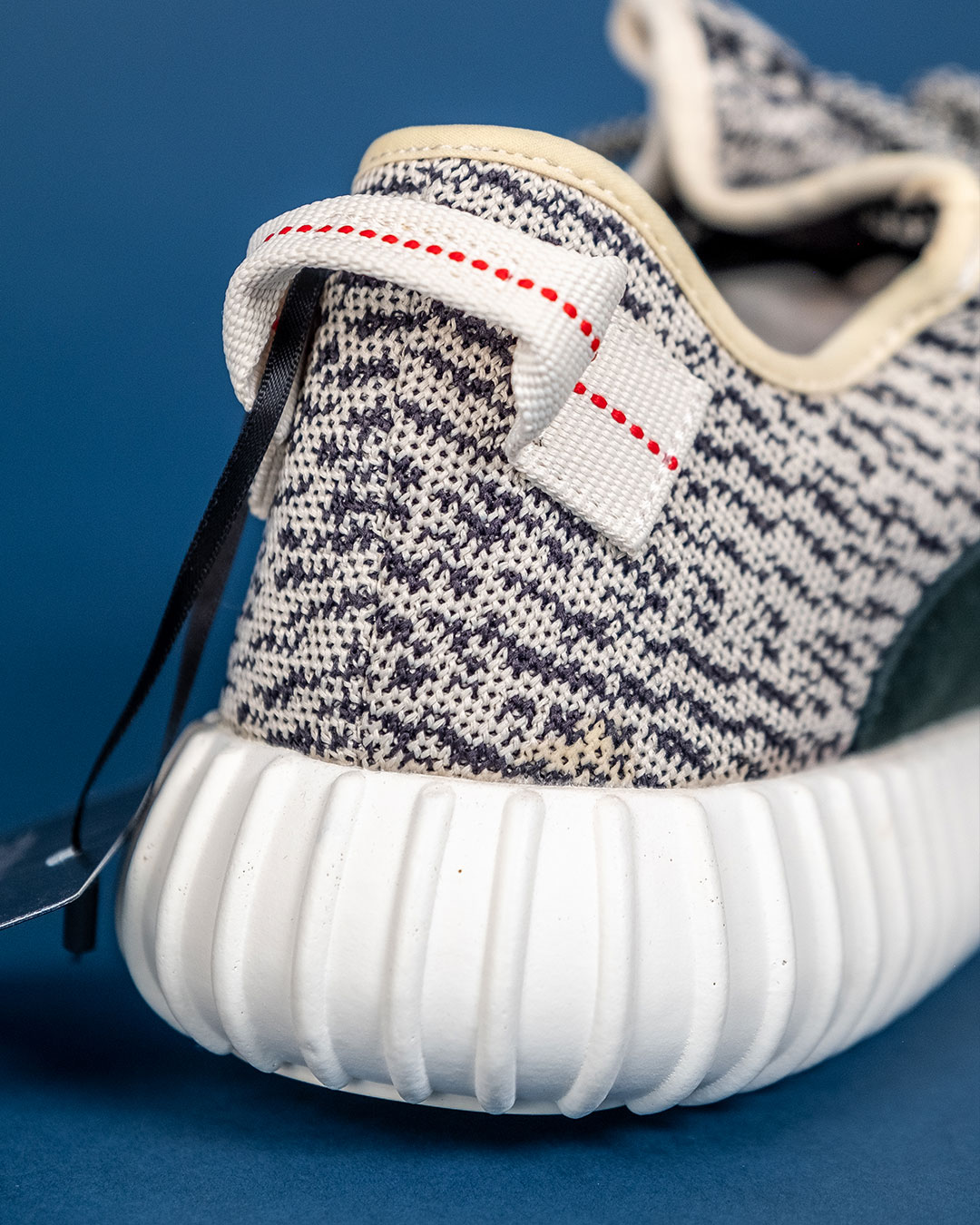 Kanye West’s obsession with design dates back at least as far as his passion for music. As early as middle school, the 21-time Grammy Award winner would often get in trouble for sketching sneakers in class.

Years later, West’s career took flight when he landed a role as a producer for Jay-Z’s Roc-A-Fella Records. After just a few years of working in the industry, Kanye dropped his freshman album titled, “The College Dropout” in 2004.

Despite the early commercial success of his music, West’s insatiable need to create left him yearning for something more. Returning to his underlying passion for design, he soon dropped his first sneaker collaboration with Japanese apparel company A Bathing Ape. The sneaker echoes his freshman album cover in its brown, orange and tan colorway, and features his “Dropout Bear” on the heel of a Bapesta silhouette.

Shortly thereafter, West found himself on the same plane as Nike CEO, Mark Parker. Their conversation resulted in the birth of Kanye’s first Yeezy partnership with Nike.

Backed by the world’s largest shoe company, West released three colorways of the Air Yeezy II between 2012 and 2014. His usage of material, shape and proportion brought something completely unprecedented to the swoosh, resulting in the Air Yeezy II quickly becoming one of the most anticipated sneaker drops of all time. Not only were the shoes unique in their design, the hype surrounding the shoes was so unprecedented that stores had to develop the now-ubiquitous raffle systems to ensure customer safety. The final pair, known as the “Red October” colorway, were released via a random Twitter link in 2014, cementing the drop in sneakerhead memory as one of the most controversial drops in sneaker history. To this day, the Air Yeezy II is often considered the best shoe Kanye has ever released.

Despite flourishing sales at Nike, West felt as though Nike wasn’t taking him seriously enough. “It was the first shoe to have the same level of impact as an Air Jordan, and I wanted to do more,” West told Forbes. “And at that time Nike refused to give celebrities royalties on their shoes.” After frustrations around the Air Yeezy II, West began to look for other brands to partner with.

With his next partner, West was determined to both maintain ownership of his brand and work with a major distributor under better terms. West saw the perfect opportunity at Adidas, where he debuted his clothing and sneakers side-by-side in his first “Yeezy Season” in 2015. Yeezy Season 1 kicked off with the Yeezy Boost 750, Kanye’s first official Adidas sneaker. The design was quintessentially Kanye, equipped with design motifs like his signature cross-strap.

Later that year West released his second shoe with the Three Stripes, the Yeezy Boost 350 in a “Turtle-Dove” colorway. The low-top sneaker with Adidas’ Boost technology helped transition high-performance sneakers into a lifestyle category, and were integral to trainers’ transformation into a high-fashion essential.

In his time at both Nike and Adidas, West’s design ethos has consistently pushed past what already is to strive for what could be. His dedication to innovation has allowed Yeezys to become some of the most coveted shoes in sneaker culture. Featuring 5 of what we believe are Kanye’s best designs, Otis is excited to present Yeezy Collection I.

Recent Sales
Based on StockX sales, the value of this collection is $25,239 as of November 2020, with a combined 12-month high of $47,711 and a combined 12-month low of $15,848.
Sold Out
Deadstock pairs of all three colorways of the Nike Air Yeezy 2’s are currently sold out across major sneaker reselling retailers like Stadium Goods and Flight Club.
Cultural Influence
Otis’ Yeezy Collection I represents five shoes that laid a new foundation for non-athlete sneaker collaborations.
Deadstock
All pairs in Otis’ collection are in deadstock condition with original box and accessories.
Collaborator
Kanye West has been called the most influential artist in hip-hop culture, backed by 21 Grammy Awards. Following his time with Nike and Adidas, he has become one of the best-known names in sneakers.
Macro Trends
The collectible sneaker resale industry is an estimated $2 billion market in the U.S. and $6 billion globally. It is projected to triple by 2025.

Inside Kanye West’s Fashion Journey: Yeezy, Louis Vuitton, Fendi and More
The 'Kanye Effect' is the hottest debate in the sneaker world
More Adidas Yeezys Are Reportedly Being Released This Year

Contact UsCareersHelp / FAQ
OTIS WEALTH, INC. (“OTIS”) OPERATES THE WITHOTIS.COM WEBSITE (THE “SITE”) AND A MOBILE APP-BASED PLATFORM (THE “APP”), AND IS NOT A BROKER-DEALER OR INVESTMENT ADVISER. ALL SECURITIES-RELATED ACTIVITY IS CONDUCTED BY DALMORE GROUP, LLC (“DALMORE”), A REGISTERED BROKER-DEALER AND MEMBER OF FINRA (WWW.FINRA.ORG) AND SIPC (WWW.SIPC.ORG), LOCATED AT 525 GREEN PLACE, WOODMERE, NY 11598. YOU CAN REVIEW THE BROKERCHECK FOR DALMORE HERE. AN UP-TO-DATE DALMORE FORM CRS IS AVAILABLE HERE.
‍
YOU SHOULD SPEAK WITH YOUR FINANCIAL ADVISOR, ACCOUNTANT AND/OR ATTORNEY WHEN EVALUATING ANY OFFERING. NEITHER OTIS, ITS AFFILIATED ISSUERS NOR DALMORE MAKES ANY RECOMMENDATIONS OR PROVIDES ADVICE ABOUT INVESTMENTS. THE SITE AND THE APP MAY MAKE FORWARD-LOOKING STATEMENTS. YOU SHOULD NOT RELY ON THESE STATEMENTS BUT SHOULD CAREFULLY EVALUATE THE OFFERING MATERIALS IN ASSESSING ANY INVESTMENT OPPORTUNITY, INCLUDING THE COMPLETE SET OF RISK FACTORS THAT ARE PROVIDED FOR YOUR CONSIDERATION.